How to Make the Most Out of Your Lab’s Move

- July 20, 2017
“The lab is moving!” I must confess, when I heard these words from my mentor about a year and a half ago, my heart dropped. Lab relocation experiences are some of the worst horror stories that you hear from fellow researchers: precious samples lost, mouse colonies never recovered, months spent re-establishing protocols. Moreover, it also meant I would have to leave San Francisco, a beautiful city that I loved to live in, and where I found many friends. Being a scientist often means not having much choice of geographic location of your work. The choice of a particular subject or even broad field usually requires a move to a new city, or even a new country. Moving with the lab means making this choice again – do I leave my project and all the progress behind, or do I accept the delay in my research and go ahead. Now, two months after our move to New York, I would like to reflect on my experiences and that of my fellow lab members on our cross-country relocation from the trainee perspective.

Be ready before you have to be ready. The process for an established PI to change institutions is a long process that could take months or even years, so when you are applying for a PhD/postdoc position, you could simply ask your potential mentor whether he/she is considering changing institutions in the near future. Moreover, this process doesn’t happen in a vacuum – so you are likely to hear from other people in the field that a certain person is considering relocation.

Make your choice early. I guess, the best advice I got from my friends in science was to decide early. Whether one settles on joining the lab on a journey or decides to stay in a new lab, or even move to an alternative career, the quicker you make this choice the easier it will be for both you and your mentor. If you decide to not to move, it will give you enough time to wrap up your things and possibly transfer them to someone new. If you choose to go with your mentor, it would let you focus on things that need to be accomplished while you still have your reagents, equipment and safety of your old research isle. Which brings me to the next point…

Try to accomplish as much as possible before the move. While the last few months at UCSF were extremely intense, my colleagues and I got a lot done. I wouldn’t want to keep such an intense work tempo forever, but I managed to get a number of big experiments completed.

Make time to learn about your new institute and your new city (or maybe a new country?). When choosing the location for my postdoc, I spent a great deal of time learning about the cities where I might eventually live so I could make an informed decision about my quality of life during my postdoc. And, while there is not much time to explore a new place when you are rushing to finish your last experiments, it is important to do similar research before relocation. Coming from the Netherlands where I did my graduate research, I was absolutely clueless that different American states have different levels of taxation, and that New York City imposes an extra tax. Moreover, medical coverage and other work benefits differ dramatically among academic institutions. Getting this information can definitely help in having informed negotiations with your boss as well.

Prepare for a disaster scenario. The scary lab-move stories are there for a reason. It is inevitable that something will go wrong. When we were packing our last boxes, my mentor told me to consider that everything could be lost. Putting rolls of bubble wrap around the slides, and placing each box of eppendorph tubes in its own ziplock bag are real precautions, not exaggerated scenarios just to tell a good story. Apparently, our -20°C freezer broke somewhere mid-country, and thankfully the moving company had a reserve freezer plugged in for exactly this kind of situation. Two months in, we are still discovering that some reagent boxes are nowhere to be found. So if there is a crucial experiment needed for the paper, it is better to do it before moving.

Use the downtime to write or learn a new skill. As there will be a period of several weeks for the shipping of equipment/reagents/mice and overall re-establishment of lab normalcy, it is a great opportunity to use this downtime for writing or taking courses that you had never found time for in the past. Our reintegration in New York happened surprisingly quickly (I did my first experiment one week after the move, although finding things took a while), but the majority of my friends experienced gaps in their research.

Enjoy expanding your network and meeting new people. As our lab just moved, people in our new institute are very excited to have my mentor on campus. Accordingly, great students want to rotate or do internships in the lab, and it is easier to approach people with questions. I am also trying to see our relocation as a “two for the price of one” scenario. One of the exciting aspects of the move is the ability to experience two different research environments within one postdoc project. While I understand that I was lucky to move between two great cities and universities, I believe being exposed to a new scientific community helps you build scientific resilience.

Get to know how to start a lab. Re-starting a lab at a new institute is a lot like starting a lab, which is a very useful experience for those wanting to run their own group after completion of a postdoc. There are so many additional aspects to starting a lab: writing a new animal protocol and re-establishing a new inventory of all of your chemicals and equipment, to name just two. The lab move gives you an opportunity to see what it takes. I always took for granted some of the shared equipment we had in California, and not having it immediately available makes you understand how many little things you need to take care of as a group leader. In Dutch, the problems associated with starting something new are called kinderziektes – children’s diseases. And I hope that going through these diseases now will help me to acquire my immunity if I ever lead a research group of my own.

Moving with a lab is an undeniably difficult and stressful period. However, having survived it, I view it as a great learning opportunity that will help me in the future. While our settling in at Columbia University is far from complete, I have enjoyed this new opportunity. And, last by not least, I scored a new set of pipettes! 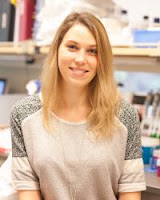