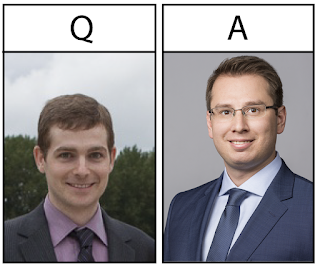 The laboratory of Dr. Vijay Sankaran at Boston Children’s Hospital and the Broad Institute of MIT and Harvard recently reported a breakthrough discovery about the role of ribosome levels in human hematopoiesis and Diamond-Blackfan Anemia (DBA). DBA is a genetic blood disorder that is caused by mutations in genes that encode ribosomal proteins (RPs), and results in low red blood cell counts. Since RPs are broadly involved in protein translation, one of the outstanding questions was why RP gene mutations would cause reduced red blood cell counts without affecting other hematopoietic lineages.

In the paper, that was published in the journal Cell (https://doi.org/10.1016/j.cell.2018.02.036), Rajiv Khajuria et al. modeled loss-of-function mutations in RP genes that are found in DBA patients. They found that limited availability of ribosomes differentially affects mRNA transcripts, and especially reduces translation of transcripts with short or unstructured 5’ UTRs that are necessary for erythropoiesis. These results provide a rare glimpse into the effects of translational deregulation in stem cell commitment. I interviewed first author Rajiv Khajuria about the story.

1. What is the most important message readers should remember from your work?
I think that there are multiple key messages from our work that are linked to each other: 1. We found that perturbations in ribosomal proteins (RPs) such as occurring in Diamond-Blackfan Anemia (DBA) result in reduced level of ribosomes in hematopoietic cells, while the ribosome protein composition remains constant. This has been a controversy for a long time especially in light of the emerging field of ribosome-mediated translation regulation and its relevance to human diseases. 2. This global reduction in ribosome levels profoundly alters translation of a select subset of transcripts, thereby impeding erythroid lineage commitment. 3. This select subset of transcripts shows certain characteristics including 5’UTR features that may confer translational sensitivity to reduced ribosome levels. These features are associated with efficient translation in unperturbed conditions and among hematopoietic master regulators relatively uniquely exhibited by GATA1, a key transcription factor of erythropoiesis. 4. Finally, I think that this work is a good example of how rare diseases such as DBA can teach us a lot about human biology.

2. How does this paper relate to previous work in the field?
Our paper builds on work by many of my scientific heroes in the field but also on previous work by our group from multiple angles. Recent work from the labs of Ido Amit, John Dick and Andreas Trumpp (Notta et al., Science, 2016; Paul et al., Cell, 2015; Velten et al., Nature Cell Biology, 2017) suggest that lineage commitment occurs in early hematopoietic stem and progenitor cells (HSPCs) that then undergo orderly differentiation to produce mature circulating blood cells rather than, as previously assumed, through a hierarchical progression of differentiation. While these studies led to a considerable insight into lineage commitment from HSPCs at the transcriptional level, the post-transcriptional regulation of these refined models of hematopoiesis and its relevance to human disease were largely unexplored. Robert Signer, Sean Morrison and colleagues revealed that dramatic changes in protein synthesis rates occur during the early stages of lineage commitment (Signer et al., Nature, 2014), indicating that post-transcriptional regulation may be critical for this process. Yet, despite these groundbreaking studies by our colleagues, tangible post-transcriptional mechanisms regulating lineage-commitment from HSPCs were mostly not elucidated. DBA provided a unique opportunity to gain more insight into the regulation of this process. Our lab has previously identified the first non-ribosomal protein mutations in DBA in the erythroid transcription factor GATA1 (Sankaran et al., JCI, 2012; Ludwig et al., Nature Medicine, 2014) and was subsequently able to show that ribosomal protein haploinsufficiency results in selective impairment of GATA1 mRNA translation (Ludwig et al., Nature Medicine, 2014). Inspired by all the above mentioned studies from our colleagues and based on the previous work from our lab, we framed the key questions of our current study: How does selective impairment of translation arise from ribosomal protein haploinsufficiency in DBA? What is the range of transcripts that is translationally affected by this defect? How is this selectivity mediated? At what stages of hematopoiesis do these alterations occur? Answers to these questions not only allowed us to gain insight into DBA pathogenesis, but also into how hematopoiesis is regulated normally and thus complements the many great studies from our colleagues.

3. Is global translation reduced in ribosomal protein mutant HSCs? Do you think they have a competitive disadvantage over time (Signer et al., Nature, 2014)?
Using the ribosome profiling approach invented by Nicholas Ingolia and Jonathan Weissman (Ingolia et al., Science, 2009), we found that only the translation of a select subset of mRNAs (including GATA1) is reduced in mutant HSPCs undergoing erythroid lineage commitment. Signer and colleagues demonstrated that the highest rates of protein synthesis occur in progenitors undergoing erythroid lineage commitment (Signer et al., Nature, 2014), which fits with our findings of how ribosome levels can selectively impair erythroid lineage commitment. Notably in this context, GATA1 requires one of the highest translation rates among various master regulators of hematopoiesis and its protein levels are reduced in HSPCs from DBA patients as we show in the current study. These findings are also in line with the refined models of hematopoiesis mentioned above, which suggest that lineage commitment occurs in early HSPCs (Notta et al., Science, 2016; Paul et al., Cell, 2015; Velten et al., Nature Cell Biology, 2017).

4. Do you see a link between ribosomal deregulation and autophagy defects in Diamond-Blackfan anemia (Doulatov et al., Sci. Transl. Med., 2017)?
GATA1 has been suggested to be an activator of genes that mediate autophagic protein turnover (Kang et al., Molecular and Cellular Biology, 2012). Given that GATA1 is among those transcripts that are selectively impaired in translation due to reduced ribosome level as seen in our current study but also in previous work from our group (Ludwig et al., Nature Medicine, 2014), this could be a link to observations made by Doulatov and colleagues from George Daley’s lab.

5. What is the most pertinent question that this work raises for future studies?
I guess our work raises multiple key questions for future studies: 1. Can we develop a clinically-relevant GATA1 expression-based therapy for DBA patients irrespective of their underlying gene mutations? 2. How exactly do the mRNA features that we identified in transcripts translationally sensitive to reduced ribosome levels mediate this sensitivity? What other layers of post-transcriptional regulation contribute to the differential translation caused by reduced ribosome level?

6. What was the most difficult hurdle to overcome during this work?
I honestly cannot point out a certain step that was particularly more difficult as compared to other parts of the whole project. I was lucky to have had the chance to work with an incredible group of people together on this study and learning from brilliant scientists who are at different stages of their careers. I am very grateful for my great colleagues without whom this all would not have been possible, particularly for the support of my mentor Vijay G. Sankaran, who gave me the right balance of freedom and guidance in this whole process.

7. How did you celebrate when the paper was accepted for publication?
In the first ten minutes after receiving the news I was just letting it sink in, didn’t talk about it to anyone, I just enjoyed it. Later on that day, as I was not in Boston at this time, I was having a nice dinner with my wife and two kids in an Indian restaurant in Berlin to celebrate.