Obtaining independent grant funding for a new lab is hard.  We all know it, but it feels bigger and heavier when it’s your own lab on the line.  In 2013 I set up my own lab and submitted my first R01 application.  I felt that I had done my due diligence in preparing for this momentous step – having completed 16 (!) years of postgraduate training.  I had put the work in and knew that this was the next leap I needed to take to really become an independent scientist.  Yet even with the benefits granted to new and “young” applicants, my score on that first R01 fell far short of the funding line. I felt the sting and shame of failure, and it rooted itself in a very dark place in my psyche. Over the next year I worked and worked and worked – mostly alone and in my office, and after a full year submitted a revision of the first grant that I felt could pass muster. I had even paid a professional editing service to help with feedback on that grant. So, when that grant was not even scored, the dark shameful thing popped right out of my chest, like in Alien.

Over the next 18 months, I put myself into what I thought of as grant-writing intensive care. Since my shame had now visibly exploded all over my person, I decided there was no sense in hiding it any longer, and I sought help from every possible angle. I asked for feedback from senior colleagues and junior colleagues. I attended career development workshops. The most useful thing I did during that time was to attend a grant writing workshop sponsored by the American Association of Medical Colleges. I am not sure I was truly eligible for that program, but I think they sensed my desperation and let me in anyway. The workshop was life-changing for me because it provided me a framework for peer-based and iterative feedback on my writing. I emphasize iterative here because while I had gotten one-time feedback from many people in prior grants, I found that it was much more effective to have an on-going conversation with people about what was clear about my writing, and what was not. This dialogue was what truly forced me to improve my writing and my mental clarity about the grant itself. At the workshop I also had a chance to meet one-on-one with the coach, who was an established investigator. Hearing him tell me that my science and my writing were good gave me the shot of confidence that I needed to plow forward. Now, I’m not saying that going to that workshop was the only thing that changed my trajectory—I was waking up at 4am every morning to work for two hours before the day started and we published two solid papers that year – but I can tell you the workshop changed the way I write. It helped me walk that fine line between detail and simplicity and taught me how to build the grant into a cohesive story. The following year I submitted two R01 applications and they were both funded.

I would like to think that I’m not the only person who has struggled with obtaining grants. Assuming this is true - actually backed up by National Institute of Health (NIH) data showing that 2013 had the lowest funding rate since 1970 - we thought it would be useful to host a grant-writing workshop at ISEH. The workshop is designed to help newly independent investigators who are submitting their first big grant. We have recruited some highly successful international scientists to serve as coaches for this workshop - Len Zon, Andrew Elefanty, and Cristina Lo Celso, to name a few! That said, we truly want to emphasize that the peer coaching and iterative aspects of this workshop are just as important as the expertise of the coach. No matter what continent you are on, consider this opportunity to jump start your lab and avoid some of the pitfalls I fell into. 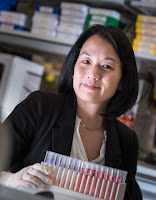