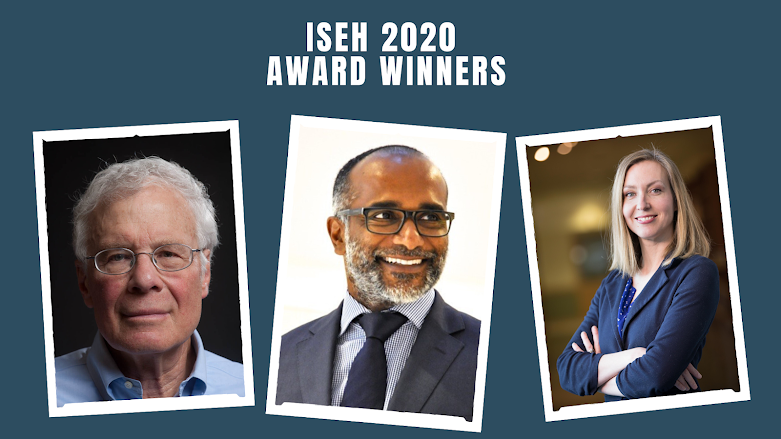 On behalf of the Awards Committee, ISEH would like to congratulate the recipients of the 2020 ISEH Honorific Awards, which will be presented at the ISEH 2020 Virtual Scientific Meeting:
2020 Donald Metcalf Award Winner: Harvey Lodish

As lead author of the textbook Molecular Cell Biology Harvey Lodish is probably one of the most widely recognized scientists from the field of Experimental Hematology. For over thirty years, Harvey’s textbook has been a companion for generations of undergraduate biology, biochemistry, medical students, with the 9th edition soon to come out. Harvey’s long track record starts with his first research paper, an abstract of work performed at Case Medical School while he was still in high school, on active transport of potassium in red cells, which was published 60 years ago. Harvey has worked with some of the top hematologists in the world, beginning with David Nathan, who did a sabbatical in his laboratory in 1970, which lead to one of the first papers elucidating the molecular defect in beta-thalassemia.  Over the decades, Harvey and his group of MD and PhD trainees have cloned and characterized many proteins important for red cell development and function, beginning with the cloning of the GLUT1, Band3 and Epo receptor genes in the 1980’s. Harvey was a founding member of the Whitehead Institute at the MIT, and amongst others, was a founder and scientific advisory board member of Genzyme and Millennium Pharmaceuticals.
Recent work in Harvey’s group focused on characterizing novel genes important for the terminal stages of erythropoiesis, including chromatin condensation and enucleation, as well as the regulation of self-renewal, proliferation, and differentiation of erythroid progenitor cells by glucocorticoids and oxygen.
"Dr. Lodish’s illustrious scientific career spanning several decades and his broad scientific impact - exploring plasma membrane proteins, receptors, iron transporters, adipogenesis, Hematopoiesis- have been previously recognized by a number of Awards/distinctions (i.e member of NAS, of AAAS, of AAM, etc.). An additional remarkable feature in his career is the mentoring of 175 students/mentees-two of them winning the Nobel prize (2004 and 2013) and Lasker Awards and many holding leadership positions in other major Institutions (Dr. Lodish was the Recipient of Basic Science Mentor Award by ASH, 2010).
Our Society, ISEH, is proudly bestowing its highest award, the Metcalf Award, to Dr. Lodish by recognizing and rewarding his exceptional and steady contributions - identifying molecular pathways, molecules, transcriptional factors, LncRNAs, etc. - in Hematopoiesis and especially in Erythropoiesis." – Thalia Papayannopoulou, MD, Dr Sci, Elo Giblett Endowed Chair, University of Washington
2020 McCulloch & Till Award Winner: Mark Dawson

Mark Dawson is a clinician-scientist at the Peter MacCallum Cancer Centre in Melbourne, Australia. He is the program head of the Translational Haematology Program, Group leader of the Cancer Epigenetics Laboratory and Consultant Haematologist in the Department of Haematology. His research interest is studying epigenetic regulation in normal and malignant haematopoiesis. After completing his clinical training in Melbourne, he was awarded the prestigious General Sir John Monash Fellowship and Cambridge Commonwealth Trust Fellowship, which he used to complete his PhD at the University of Cambridge. During his PhD, he described one of the first examples of how a signaling kinase can directly influence transcription by acting as a histone-modifying enzyme. Following his PhD, he was awarded the inaugural Wellcome Trust Beit Prize Fellowship to pursue his research into epigenetic regulation of leukaemia stem cells. This research identified a new therapeutic strategy for acute myeloid leukaemia by targeting the BET bromodomain proteins that function as epigenetic readers. This work helped set the platform for clinical trials with this first in class epigenetic therapy. His research has been published in world leading journals including Nature, Cell, Science and New England Journal of Medicine. He is a fellow of the Royal Australasian College of Physicians and Royal College of Pathologists of Australasia, a Senior Research Fellow for the Leukaemia Foundation of Australia, a Howard Hughes Medical Institute International Research Scholar and has been elected into the Australian Academy of Health and Medical Sciences.
“Dr. Dawson has been an absolute pioneer in our understanding of how epigenetic regulators contribute to the initiation, maintenance, and progression of acute myeloid leukemia and other aggressive hematological malignancies. His groundbreaking scientific discoveries have led to the characterization of novel epigenetic mechanisms as well as the development of epigenetically-targeted therapies which have been translated from the laboratory into the clinic. As an active physician scientist, he has also led several of these clinical trials and leveraged larger international translational collaborations to study and decipher molecular mechanisms that underlie response and resistance to epigenetic therapies. In this context, I would like to particularly highlight Dr. Dawson’s pioneering work on non-genetic mechanisms of therapeutic resistance, the impact of which is hard to overstate, and which has moved the entire field into a novel direction, which is now explored by numerous laboratories around the globe. I cannot think of a more innovative, impactful, and deserving scientist to receive this prestigious award.” – Ulrich Steidl, MD, PhD, Albert Einstein College of Medicine
2020 Janet Rowley Award Winner: Jennifer Trowbridge

Jennifer Trowbridge is an Associate Professor at the Jackson Laboratory in Bar Harbor. Jennifer studied for her undergraduate and PhD degrees at the University of Western Ontario, followed by postdoctoral training at the Dana-Farber Cancer Institute and Children’s Hospital Boston. The Trowbridge laboratory studies cell fate regulation within the hematopoietic system, with a current focus on the epigenetic regulation of hematopoietic stem cell (HSC) and progenitor cell lineage commitment in three contexts: (i) normal blood development and maintenance, (ii) alterations that occur during the process of aging, and (iii) alterations that occur during the process of transformation giving rise to leukemia. Her lab discovered that chromatin structure can be used to determine cell-of-origin in acute myeloid leukemia (AML). Moreover, the group discovered that multipotent progenitor cells contribute to immune system aging and loss of adaptive immune response. Recently, the group also developed an innovative mouse model that recapitulates progression of clonal hematopoiesis to blood cancer as it occurs in humans, which offers a new resource for basic biological studies as well as for testing therapeutic modalities in an in vivo setting.
“I am beyond excited that ISEH is awarding the inaugural Janet Rowley Award to a most deserving shining star in our field, Dr. Jennifer Trowbridge. Dr. Trowbridge already had an exceptional track record in discovering novel regulatory mechanisms that govern HSC fate decisions during her graduate studies in Mickie Bhatia’s lab and post-doctoral training with Stu Orkin. In her own lab, she is leveraging her unique expertise in chromatin biology to uncover the mechanisms that go awry during ageing or malignant transformation. Her innovative and rigorous work has already resulted in several landmark papers that are changing our understanding of the ageing process and clonal hematopoiesis.  Her work has been celebrated by prestigious scholar awards (ASH Scholar, V-foundation Scholar, Ellison Medical Foundation New Scholar in Ageing, Evans MDS Discovery Research grant) and highly praised presentations at meetings, including the selection of her postdoc’s abstract in the highly coveted and extremely competitive Plenary Session in the American Society of Hematology annual meeting last year.  Seeing her trainees give these impressive presentations in major meetings is a testament to the fact that Dr. Trowbridge is a fantastic mentor. Dr. Trowbridge is also shaping the field through serving in hematology societies, and by being a generous collaborator whose model systems will have an impact for many years to come. She truly embodies the same attributes as Dr. Janet Rowley, by being an influential scientist and an inspiring role model.” – Hanna Mikkola, MD, PhD, Eli and Edythe Broad Stem Cell Research Center, University of California Los Angeles
Annual Meeting ISEH