- July 23, 2020
Exploring Experimental Hematology: Engineering of targeted megabase-scale deletions in human induced pluripotent stem cells
In this issue of Simply Blood, we are highlighting and deconstructing one of the journal’s latest manuscripts by first author Andriana G. Kotini. This paper is an extension of the Papapetrou Lab’s ongoing work focused on modeling myelodysplastic syndrome (MDS) and acute myeloid leukemia (AML) using human induced pluripotent stem cells (iPSCs). [https://www.exphem.org/article/S0301-472X(20)30193-4/]
Reason to read this paper:
AML is one of the most common malignancies of adulthood, comprising about 1/3 of all new leukemia cases diagnosed in the United States each year. AML often develops from MDS, a preleukemic condition of HSC failure caused by recurrent somatic mutations and chromosomal aberrations in HSC clones that impair their effective differentiation. MDS occurs sporadically in older adults but can frequently affect younger people with inherited bone marrow failure syndromes such as Fanconi anemia or Shwachman-Diamond syndrome. One of the most common recurrent chromosomal aberrations occurring in MDS and AML is deletion of the long arm of chromosome 7 (7q-). Despite its frequent occurrence in MDS and AML, the specific mechanism(s) by which 7q- contributes to MDS and AML pathogenesis is still not well understood. Therefore, robust human models of 7q deletions could provide a platform for mechanistic investigation.
Strategy used in this paper:
Here, the authors used gene editing and hematopoietic differentiation of human iPSCs. The hematopoietic potential of iPSCs has been successfully leveraged to model a variety of benign and malignant blood diseases over the preceding decade since their discovery. In this study published in Experimental Hematology this month, Kotini and Papapetrou used CRISPR-Cas9 with guide RNAs targeted to generate deletions encompassing the specific regions 7q35-36.3 and 7q33-36.3. These deletions covered a region previously implicated by the authors in being critically associated with del(7)-MDS hematopoietic phenotype in human iPS differentiation. Starting with a wild-type iPSC line, the authors used this strategy to generate three clones with various 7q deletions: 7q35-ter, 7q35-36.3, and 7q33-36.3. Importantly, these iPSC clones were otherwise karyotypically normal. 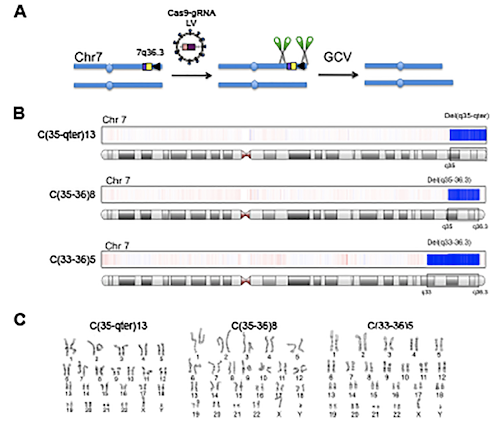 To determine the impact of these deletions on hematopoietic potentials, the authors induced these human iPSC clones into hematopoietic lineage using embryoid body-based differentiation method. They found that only the clone with the largest 7q33-36.3 deletion (termed C(33-36)5) showed impairment in the formation of phenotypically primitive CD34+CD45+ hematopoietic progenitor cells (HPCs) at the end of the differentiation period. As expected, these HPCs bearing the 7q33-36.3 deletion showed impaired colony formation in methylcellulose culture, while the other two clones did not. 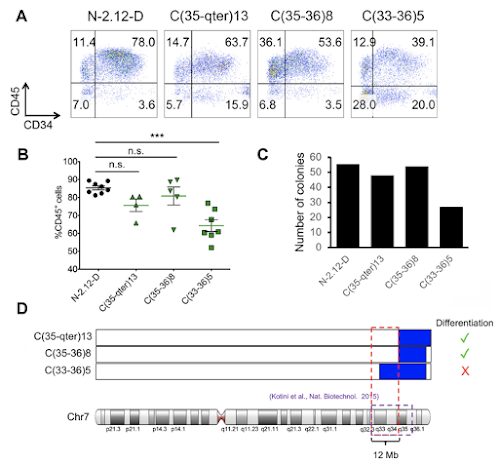 Implications:
Taken together with the authors’ previous work, these results define a specific region of chromosome 7 (7q32.3-7q35) required for effective emergence of HPCs following differentiation of human iPSCs. The authors posit that this region includes novel genes of potential importance to MDS, as it does not span genes previously implicated in human MDS and AML such as EZH2, CUX1, and SAMD9L. Future study focused on this key region will likely provide new understanding into molecular mechanisms of the pathogenesis of MDS. Overall, this paper provides a key resource for the engineering of specific chromosomal abnormalities in human iPSCs, which is applicable to a variety of disease models.
Co-Authored By:
Grant Rowe, MD, PhD
Physician, Cancer and Blood Disorders Center
Assistant Professor of Pediatrics, Harvard Medical School
Momoko Yoshimoto, MD, PhD
Associate Professor, Center for Stem Cell and Regenerative Medicine
Institute of Molecular Medicine, McGovern Medical School
Experimental Hematology ISEH Research