- November 12, 2020
In this issue of Simply Blood, we are deconstructing an invited perspective from Experimental Hematology as Dr. Forsberg and colleagues build on their interesting prior work on differentiation of tissue resident macrophages (trMacs) via an interleukin-7a receptor (IL7Ra)-positive progenitor (Leung et al. 2019). trMac differentiation follows a ‘nontraditional’ pathway of myeloid cell specification occurring in fetal hematopoiesis. In this study, they now examine the role of IL-7 signaling in the maintenance of other tissue myeloid cells - neutrophils and eosinophils - in the lung, work directed at better understanding the immune system of the lung and its relationship to respiratory diseases.
First, the authors examined lung B-cell, neutrophil, and eosinophil content in Flk2-/-, IL7Ra-/-, or combined knock-out mice. Dr. Forsberg had previously shown that all ‘traditional’ adult myeloid and lymphoid cells, but not trMacs, develop via a Flk2-positive progenitor (Beaudin et al. 2014). Here, as expected, they found that IL7Ra was required for B-cell residence in the lung, but surprisingly, they also found that lung eosinophils also depended on IL7Ra. 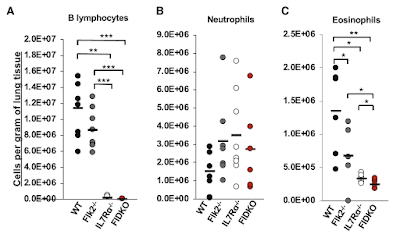 The authors next use lineage tracing to determine whether, like B-cells, eosinophils developed via an IL7Ra-expressing progenitor. Here, they modified their prior ‘FlkSwitch’ transgenic system to develop IL7RSwitch. In these transgenic systems, if a mature cell developed via a progenitor expressing Flk2 (FlkSwitch) or IL7Ra (IL7RSwitch), cells would transition from Tomato to GFP expression. As expected, they found that B-cells, neutrophils, and eosinophils were all labeled with GFP in the FlkSwitch system, and that B-cells were labeled with GFP in the IL7Switch system. However, despite their dependence on IL7Ra, eosinophils were not significantly labeled with GFP in the FlkSwitch system, suggestive of a cell extrinsic mechanism of eosinophil regulation by IL-7. 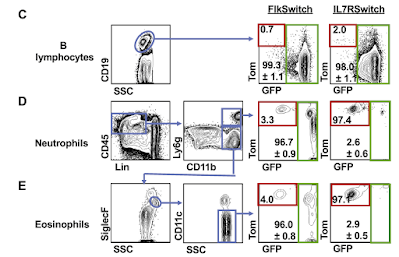 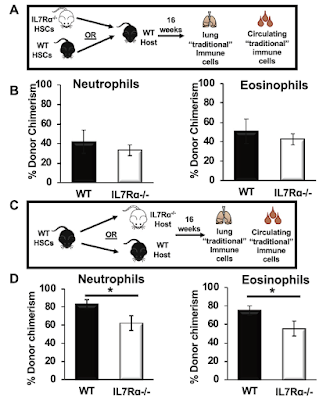 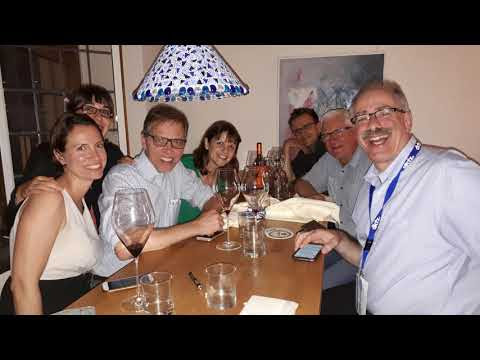