- March 28, 2019
In this issue of Simply Blood, Leonid Olender is Exploring Experimental Hematology and highlighting and deconstructing one of his favorite manuscripts from the ISEH society journal: "MISTRG Mice Support Engraftment and Assessment of Nonhuman Primate Hematopoietic Stem and Progenitor Cells." 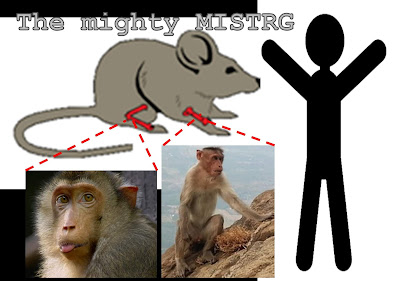 Development of novel Hematopoietic Stem and Progenitor Cell (HSPC)-mediated gene therapy strategies for various hematological disorders has become a popular and highly competitive niche of biomedical research over the past two decades. One of the main challenges in the field is development of animal models that would allow to check the efficiency of such new therapies, as well as to address safety issues before proceeding to clinical trials. In their recent paper in Experimental Hematology Dr. Radtke and Dr. Rongvaux show how the MISTRG mouse they developed might be a useful tool to overcome these obstacles.

What to expect in this paper?

Non-human primates (NHPs) are commonly used as large animal models when it comes to testing novel Hematopoietic Stem Cell (HSC)-based gene therapy approaches. However, experiments on these animals require larger amount of time and resources compared to mice. Stefan Radtke in close collaboration with the researchers from Dr. Rongvaux's lab at the Fred Hutchinson Cancer Research Center wanted to find out whether HSPCs from NHPs are able to engraft mice. In this paper they show that unlike commonly used NSG mice, cytokine-humanized MISTRG mice produced in their lab demonstrated effective dose-dependent multilineage engraftment with NHP HSPCs in multiple hematopoietic organs (peripheral blood, spleen, thymus and bone marrow). They also report that only HSC-enriched CD34+CD90+CD45RA− cell population was able to provide such an engraftment, as was previously reported by Dr. Radtke and colleagues [reference for Radtke et al. STM, 2017].

Mice are probably the most broadly used animal models in hematological research primarily due to speed and availability. This study shows that MISTRG mice might provide a more feasible and cheaper alternative to NHPs in experiments involving transplantation of HSCs. Moreover, a study published recently (link to Song et al., Nature communications, 2019) reports that MDS patient-derived xenografts in these MISTRG mice may sustain the genetic complexity of the original sample and can be propagated via serial transplantation, providing potentially useful tool for determination of an effective therapeutic strategy in a personalized manner. Taken together, MISTRG mice can potentially serve as a very useful model when working with both NHP and human normal or malignant HSCs.

Stefan Radtke, first author, is adding: "Studies in large animals such as the NHP are very expensive and require special facilities, making high throughput testing of novel strategies very difficult. Consequently, only individual and heavily pre-selected approaches are tested in these pre-clinical large animal models. Unfortunately, pre-selecting treatment strategies based on ex vivo experiments and/or human xenograft assays can bear the risk of misinterpretation, lack of translatability, or, in the worst case, lead to failure of long-lasting and expensive large-animal experiments. Availability of this novel monkeynized MISTRG model has the potential to significantly reduce the costs for large-animal transplants, facilitate the high-throughput screening of gene therapy and potentially CAR T cell strategies in vivo, and enable a more objective selection of conditions that are ultimately tested and tracked long-term in the NHP.”